Good Hunting in Minnesota
Ha, I bet that title will lead some Internet searchers astray.

Last week Mrs. Cheap Thrills and I were in Minneapolis, or Minnefabulous as it is known by, um, well, maybe its not really known as that, but you do get a few hits if you type it into Google. We had dual objectives heading out to the land of lakes:

Priority 1: Find a place to live. Mission accomplished! We arrived in Minneapolis last Saturday and stayed through Wednesday, but we found a great apartment (near the West Bank of the U) on Sunday.

Priority 2: Job interview for yours truly. At a board game company, so I was pretty psyched about it.

And I got the job! For the last several years I've been a freelancer writer and editor, and for all the freedom associated with that, it'll be nice to go back to a regular paycheck and paid benefits. I start in July. Working at a board game company! Cool.

So we found an apartment on Sunday, and my job interview was over with by Monday night. That left us with nothing important to do Tuesday and Wednesday so we just went sight-seeing: Uptown, Downtown, several lakes, the sculpture garden and that cool spoon, the Mall of America, and last but certainly not least, the Canterbury! 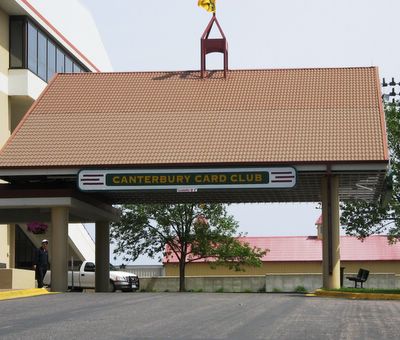 We didn't play, since we were just popping in on our way to the airport, but damn did it seem nice. I was following the recent comments-discussion on Bill Rini's blog and no less a poker authority than Chris Halverson described the Canterbury Card Room as "Quite possibly the best run card room in the country. The Wynn took a couple floor people and a ton of dealers to staff the new poker room. That’s how good it is." Freakin' sweet! (Even if it doesn't end up being the site of a WPBT event.)

Comments:
What are you going to be doing for the board game people, sounds like a cool job. Glad to hear everything worked out so well :)

congrats! best of luck on the new gig.

I'll be copy- and substance editing game rules and components, and doing a little writing.

Woo hoo! Congrats on the job.

Canterbury rocks despite the waits. Just remember, Canterbury is the only card room in the nation where the tourists are better than the locals.

Congratulations on your new adventure!

Have the mosquitoes introduced themselves to you yet?

Did you happen to go the other way down the road to Mystic Lake?

Drizz -- yup, the folks we were staying with held a little BBQ Tuesday night, and the mosquitos ate like kings. And yup, we popped into Mystic Lake too. I was thinking they had a poker room too, but then I realized it was Treasure Island's ads for Hold'em tourneys that I had seen.

Stay away from Mistake Lake! Don't give in to -EV games!!!

True, the poker rooms you'll find are at Grand Casino in Hinckley, Jackpot Junction in Morton, and Fortune Bay way up in Ely.

Or... Turtle Lake, WI just right across the border

Thanks for the rundown, Drizz -- I didn't know about Turtle Lake.

Just remember that NL is banned in MN... might not be true for WI though.

You can get a weird $5-$50 spread limit game in Hinckley which is I guess their way of skirting the law.

Congrats, and welcome to Minnesota! Damn, with all these bloggers in and around the cities, I think it's about time I set up a home game!

Congrats on all the accomplishments in one weekend...if you were in NYC looking you would still be sleeping on my or dereks sofa asking why it's so hard to get a place here. Best of luck...and they have a card room to boot.