Victorious JD!!
I won the $1 Stud-8 tournament on PokerStars last night, beating out 534 other players for a win of $133. Woo-hoo! I've won 2 or 3 other MTTs before, but this was definitely the largest field I've won in. I only play a few tourneys a month, always for low buy-ins, so this is a decent win for me. Cheap thrills. 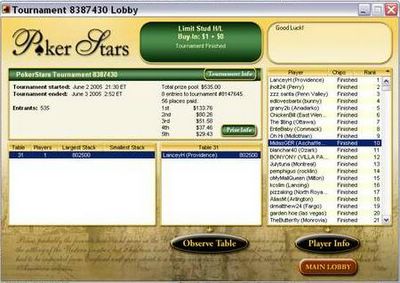 (I need to get better at screen-capturing.)

I went into the final table with by far the biggest stack. The poker gods had been kind to me and granted me many aces. Boy is playing with a big stack fun. Plenty of times shorter stacks gave me free cards, and plenty of other times they folded hands on 4th or 5th street that might've beat me, because they knew I'd make them pay to go to the river. 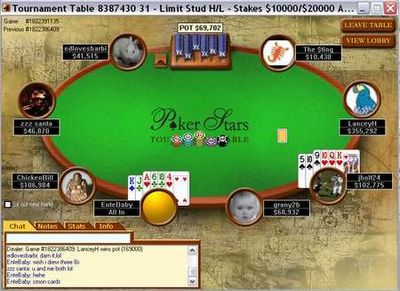 At the final table, it came down to heads up very quickly, but then my opponent and I duked it out heads up for what seemed like at least a half an hour. Have you ever played Stud-8 heads up? Two words: split pot. I'd played heads up a few times before in Stud-8 sit-n-gos, but in those the blinds are usually really high by the time it's heads up. Last night they weren't that high, and we basically played until they were. Most of the railbirds got bored and left! With my much larger stack I probably should have made shorter work of my opponent, but what can I say, it took a while. I got the victory and that's what counts :-)

Those $1 tourneys on Stars are really a great value. They offer them in every game they have on a regular weekly schedule, and they're in the evening, unlike so many other sites that only offer cheap tourneys in the middle of the day or middle of the night. And of course, Stars has the best tourney interface around. And there's no juice on the $1 tourneys! I try to play in at least one a week, usually in a non-Hold'em game. Heck, I've even played in Omaha tourneys, figuring it's a cheap way to get practice in at my very worst game.

I won't get in any more poker before we leave for Minneapolis tomorrow to go apartment-hunting, but I guess this little victory can hold me for a few days :-)
posted by Unknown at 3:09 PM

Comments:
Congrats on the win :)